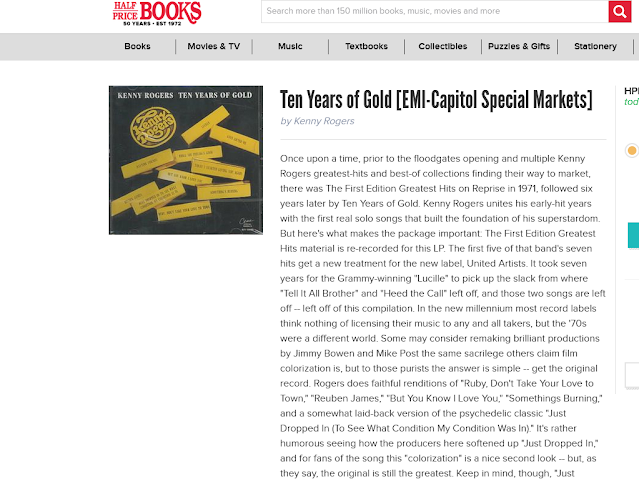 Once upon a time, prior to the floodgates opening and multiple Kenny Rogers greatest-hits and best-of collections finding their way to market, there was The First Edition Greatest Hits on Reprise in 1971, followed six years later by Ten Years of Gold. Kenny Rogers unites his early-hit years with the first real solo songs that built the foundation of his superstardom. But here's what makes the package important: The First Edition Greatest Hits material is re-recorded for this LP. The first five of that band's seven hits get a new treatment for the new label, United Artists. It took seven years for the Grammy-winning "Lucille" to pick up the slack from where "Tell It All Brother" and "Heed the Call" left off, and those two songs are left off -- left off of this compilation. In the new millennium most record labels think nothing of licensing their music to any and all takers, but the '70s were a different world. Some may consider remaking brilliant productions by Jimmy Bowen and Mike Post the same sacrilege others claim film colorization is, but to those purists the answer is simple -- get the original record. Rogers does faithful renditions of "Ruby, Don't Take Your Love to Town," "Reuben James," "But You Know I Love You," "Somethings Burning," and a somewhat laid-back version of the psychedelic classic "Just Dropped In (To See What Condition My Condition Was In)." It's rather humorous seeing how the producers here softened up "Just Dropped In," and for fans of the song this "colorization" is a nice second look -- but, as they say, the original is still the greatest. Keep in mind, though, "Just Dropped In" songwriter Mickey Newbury is a country artist, so it is not as much of a stretch as the rearranging of John Carter's "Incense & Peppermints" would have been. The Top Five hit "Lucille" was quickly followed by the Top 30 hit "Daytime Friends" and it was the harbinger of things to come. Both "Lucille" and "Daytime Friends" got to number one on the country charts, making the crossover for the star complete. It would be about a year before Rogers' first of 18 more hit records would start charting, so this collection summed up the activity from late 1967 to late 1977. Larry Butler co-produces the affair with Rogers and they add "While the Feeling's Good," "Love Lifted Me," and "Today I Started Loving You Again" to the mix. Though those songs weren't on the national Top 40, it is clear the duo wanted to balance out the new with the old by including five titles from both phases of the singer's career. Rogers was the first to really combine country, adult contemporary, and national Top 40 pop chart action over a long period of time with multiple songs. Dolly Parton, Tammy Wynette, Johnny Cash, and others may have found fans in all three worlds, but Kenny Rogers was to country what the Bee Gees were to the discos -- a name from '60s hit radio finding attention and conquering new avenues in the '70s and '80s. With the Jordanaires, steel guitarist Pete Drake, engineer Billy Sherrill, bassist Tommy Allsup, and many others, the singer immediately capitalizes on past and future, utilizing stellar players. In 1978, Kenny Rogers and record exec Len Epand published a book, Making It With Music: Kenny Rogers' Guide to the Music Business; it is a substantial chronicle of how this music came to be. ~ Joe Viglione, Rovi Read less 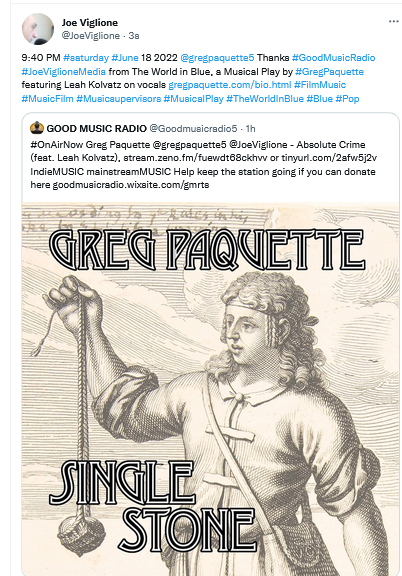