Carole King Live at Montreux 1973 - a review by Joe Viglione 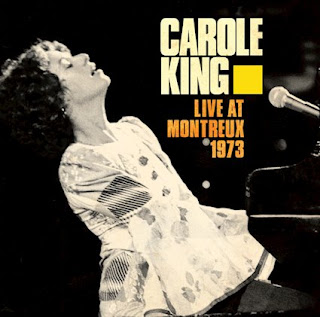 It always sounds like Carole King is singing "I just got to have your baby" on "I Feel the Earth Move," the hit flipside of her break-through 45 "It's Too Late."  And before we get into the minutiae - that King's first solo hit was "It Might As Well Rain Until September"

it always sounds like Carole King is singing on the flip side to "It's too Late," the classic 45 RPM "I Feel the Earth Move."  It's a terrific opener for solo Carole King and given the majesty of the Tapestry album, a sure crowd pleaser.  This recording from the resort town in Switzerland on Lake Geneva, a shoreline made so famous by Deep Purple,   . This edition to what I call  "The Montreux Collection" is crystal clear and - let's face it - many of us never thought we'd be going back in time 43 years after the event to listen in 2019.  "Smackwater Jack" and a raspy-voiced "Home Again" are picture perfect, catching
a snapshot of King when she was the queen of the pop music charts.  Sublime.


"I just got to have your baby" it always sounds like Carole King is singing on the flip side to "It's too Late," the classic 45 RPM, "I Feel the Earth Move."  It's a terrific opening track for a solo Carole King and given the majesty of the Tapestry album, a sure crowd pleaser.  This recording from the resort town in Switzerland on Lake Geneva, a shoreline made so famous by Deep Purple, has held many a legendary performance. This edition to what I call  "The Montreux Collection" is crystal clear and - let's face it - many of us never thought we'd be going back in time 43 years after the event to listen in 2019.  "Smackwater Jack" and a raspy-voiced "Home Again" are picture perfect, catching
a snapshot of King when she was the queen of the pop music charts.  Sublime.

"Beautiful" is one of my all-time favorites.  It is one of those songs that you can put on to get you out of a funk, truly an inspirational, magical melody and the performance is exquisite. Performing night after night some fans - and artists - may take it all for granted, but we who appreciate these vibrations pouring forth think otherwise.  These audio impressions become otherworldly, especially "Up On The Roof," the 1962 classic for The Drifters.  King released it on her 1970 pre-Tapestry lp, Writer.  Here we have a 1973 reading by one of the co-writers and, think about it, the stretch from 1962 to 1973 seemed like an eternity, those eleven short years, and now we are talking of a forty-six year span from the Montreux recording to 2019.  Can we go for a time capsule on the moon for entities in the next century to re-discover these amazing "artifacts."  Timeless music.

"It's Too Late" is pensive, moody, a deep look into the 45 RPM rendition, bordering on bluesy. It may be the same tempo, but it doesn't seem like it.  Very nice, the voice coming from a deep blue space in time.

Now let's get to the Fantasy album.  From 1970 to 1974 King had released six albums of original material - by comparison, Elton John released seven studio and one live album in that same period, and Buzzy Linhart, known for co-writing a signature hit for Bette Midler ("Friends," see my extensive review on AllMusic.com where the artist and I explore "Friends" in depth) released four bordering on five in that same period.  Why I bring Linhart up is that these three artists had immense pressure to come up with new material in a short window of time.

"You Light Up My Life" is my favorite song from the album, released in June of 1973. In 1977 Debby Boone would hit with a similarly titled Joe Brooks song from the film of the same name. Interesting in that short span of time the hugely popular King's tune took a back seat to Brooks' composition, but now, decades later, many in the new generation appear to have little interest in rock history.  And perhaps that's the pitch for important work like this,  perhaps the new record industry for vital recordings is education through schools around the world to study this "important art," as Rolling Stones producer Jimmy Miller seriously called it.

In retrospect I believe the Fantasy album to be a wonderful offering by one of those "important artists" that was too much of a diversion from the pop majesty of Tapestry.  Even for a musicologist the switch from pop to jazz was jolting, kind of like Aerosmith playing "Dream On" and "Back in the Saddle" and then going into Steve Tyler's country album in its entirety, or Linda Ronstadt singing in Spanish for a concert when her audience wanted a song written by one of the Monkees..."Different Drum."    Mike Nesmith  Different Drum https://www.youtube.com/watch?v=SMkiZ9tO-Zs


work in progress:
With Tom Scott on flute, saxophone and other instruments;  Mike Altschul - saxophone  George Bohannon on trombone, 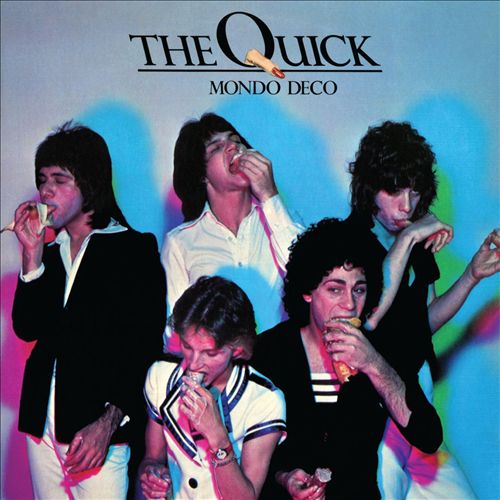 Earle Mankey worked with Sparks and the Dickies, and the type of understanding necessary to translate sounds from those experimental groups is a plus on Mondo Deco, from the original Quick. As with the other major Kim Fowley and Mankey discovery, the Runaways, this band was released on Mercury in 1976, and it is one of the best examples of fun new wave to escape unscathed from all the hype.
Unfortunately, it failed to sell in big numbers, but the album is terrific, a real underground gem. Guitarist Steven Hufsteter writes impressive and energetic pop; "Hillary" and "No No Girl" are two excellent examples. The Runaways should have cut "Anybody" -- it could have been their breakout hit. With its tight bassline and perfect hollow underground rock drums, Mondo Deco has lots of treats hidden among its ten tunes. Vocalist Danny Wilde sounds like a hybrid of Nick Gilder and the Sweet, and this music should have been all over the radio. Where the New York Dolls and the Runaways had limitations inherent in their concepts (notice how quickly Joan Jett rose up the charts once she figured that out), the Quick have all the elements that should have opened doors denied to the comical blitz of the Dickies and the quirky insanity of Sparks. What Mankey did to the Pop on Arista was unforgivable -- he mutated them beyond recognition, homogenizing the best elements of what didn't need modification. The Quick, on the other hand, strike that balance missing from other bands, something that would deny the Dickies, for example, airplay on Top 40. The cover of the Four Seasons' "Rag Doll" is fun, but it is their rendition of the Beatles' "It Won't Be Long," which leads off the album, that should have been a number one smash. The cover photo of the five bandmembers eating ice cream cones is a bit too contrived, but the back-cover image of a youthful underground Raspberries works. This is Eric Carmen if he played alternative rock -- and it is one of Fowley's best moments next to his work with the Modern Lovers. ~ Joe Viglione
Joe Viglione 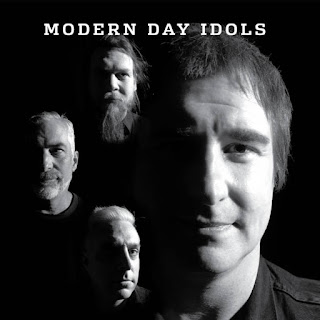